Jay writes “I grew up on a big cattle ranch in eastern Oregon where I hunted and farmed from a young age. I pride myself in saying that can track a cotton ball in a snow storm and guiding many hunts for people for bear, elk, and deer. I have seen and experienced every predator in the Pacific northwest and know what track they lay, and how old. But one experience changed my life forever and I feel maybe you could bring some insight, and or knowledge.

I would like to get into the mountains as much as possible and find new spots or fishing holes. I was traveling east on mountain roads in between cascadia and sisters on a road system on the north side of green peter and foster dam. I would stop occasionally and walk a little bit of the road to ensure it wasn’t overgrown or sunk in. It was around the first of May nobody goes up where I was because it can be a bit dicey. But i would check if there was any spots i could drop off the side and fish or gold pan. I did this until i hit a dead end. I was literally in between sisters and Cascadia when i had to turn around and head back to another road system. On the way back I rounded a corner and saw a pile of rocks on the road. They were stacked in a pyramid.. big from small, top to bottom. They were not there on the way up, but almost in the middle of the road on the way back. So I parked the my jeep, I was about 30 yards from the pile.

I exited my jeep and walked to the pile, but was in shock.. this is how the Iraqis would mark IEDS, and almost in shock. There was and embankment going up to my left almost vertical about 30 feet, and tapered off a little bit to the top of the hill, and almost a sheer drop off to my right. As I studied the rock pile for a few seconds something started to charge me from on top of the mountain on my left. I’m always carrying a gun so I drew my pistol and held it where the sound was coming from and as soon as I drew it, it stopped. I was frozen with my pistol held where the sound came from with the mentality I’m about to smoke this bear. I have about 30 feet to move left or right while dumping 230 grains of hollow points in it, but it never showed. It froze when I did.. I held that position for about a minute when I decided to start moving towards my vehicle. As I moved towards my jeep I could hear it parallel me on the ridge above out of sight but I never dropped my weapon. That’s when i knew something else was going on. I have experienced bear, cougar and every predator in our mountains and a bear wouldn’t have known if someone drew a pistol. So I was thinking human possibly? But didnt know, because how would it know to stop when I drew down? As I got to my jeep and held for a bit to make sure I wasn’t imagining things, or hearing things.. I switched to off hand with my pistol while holding up the mountain, started my jeep and drove off.

I was so confused when I drove off that I headed straight to my hunting partners house and told him we needed to head up there to see what’s going on. When we got back up there the rock pile was still there.. and we heard nothing but silence for the first few minutes.

It was around 10 minutes of studying the rock pile and seeing strange tracks behind us going up the cliff when we heard whoops. They were in sequences of 3 directly to our south. It was just a whoop, whoop, whoop. It happened until towards the Bend of the road to the north started doing a whoop.. this was also in a sequence of 3. We were super confused, then around the Bend of the road on the east side the whoops started there… and both spots in between whoops started, but at this point there was only 1 whoops per area. It sounded like a grouse mixed with Hercules or hulk. Idk… but not right..we decided to get out of there.

We went back 2 days later with a fire team and track whatever it was. When we got above the cliff it was like a nuke went off. Tree barks everywhere… loke 8-10 in dug firs pulled from the ground and shoved top first into the ground. Root was and all. Tree breaks on break breaks. I’ve never seen anything like it. The strangest thing was we found 3 separate tracks, human like barefoot tracks different sizes. It was the strangest thing I’ve ever encountered and from this day I will not go into the woods alone. Some of the guys I was with say wiccans and their summer solstice festival, some say bigfoot. I can only say what the tracks tell me, and no human could have came at me that fast down the mountain, and stop when I drew my pistol.” 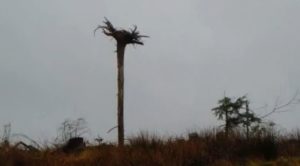 Kelly writes “We was riding dirt bikes in the back country of Central Utah. When we stopped to gauge the trail things were just weird. Dead no birds nothing my little brother pointed out to me. My cousin walk up the trail to see how bad it gets when he call my name to come look. As I stated walking I had a really weird gut feeling. As we’re walking up hes walking down. He catches something out of the corner of his eye to left up the Hill. Screaming as he drops to the ground faster than I’ve ever seen anyone I see a large tree coming horizontally at him breaking smaller trees as it went. I looked to see what was going on and I saw the biggest thing that I ever seen. There is so much more to this encounter id be typing all day I’m not very good with emailing I apologize for the grammar and spelling and punctuation.