Cindy writes “Hi Wes, I’ve thought a lot about sharing what has been happening here and to be honest, when it all started I had no idea what was going on!

We have lived in this house for 20 years. It’s in a Beautiful area in the foothills of the Blue Ridge Mountains in Virginia. When we bought this house, we were traveling 9-10 months of the year… only coming home occasionally. This pattern continued until 2015 when we started a different path. My husband is a Speaker, Professor and does work for the State Department, so he was still Very busy.

At that point, I was home alone 98% of the time. I started to hear noises in the woods At night… and Knocking! The Master Bedroom has a Balcony off of it that faces in to the woods. It’s at least 14 ft off the ground. At night I would open the door to the balcony and just have the screen door … so I could hear the frogs, etc. That’s when I noticed the noises.

We have all matter of wildlife here… Fox, coyotes, an occasional bear and lots of dear. We had a group of deer ( at least 30) that slept in the side woods next to my house. I hadn’t been home for any length of time in years, so I was settling in.

One night early on,about 1 am , I heard something coming thru the woods… sounded like a bulldozer! It was LOUD! Just about the time I got up, Something hit the balcony SO hard it shook the whole room!!! The balcony is wrought Iron so it was loud!

It scared me to death!

I grabbed the flashlight out of the drawer and went out on the balcony. I didn’t see anything! It had only been seconds… and Nothing was there! This became a regular occurrence. Something would hit the balcony, and I would run out there… and Nothing was there! I started to keep the flashlight right next to me on the bed so maybe I could catch who was doing this! Then, I heard the screams!

It was about 3 am and I got up to let my little dog out. He was getting up in age and I had to take him out frequently.

I’m standing out in the yard with him and from across the street I heard what sounded like the gates of Hell opened! Omg!!! It started really low ( like Bobo) and went really high. It was like a gut punch!!

I grabbed my dog mid-pee and ran in the house! It was Terrifying! My heart was pounding and I couldn’t calm down! That was the point that I started to look around on the internet for answers. I was skeptical about what I found. I was sure that it HAD to be something other than a Sasquatch.  I visited with my neighbor the next day to see if they had heard that horrific scream!! They said No, but a few days before they were out on their deck and something was Low growling until the woods.

My friend got up to see what it was and she saw eyes! It sufficiently scared them and they went inside!

Shortly there after, a lady from the next subdivision over came walking thru the neighborhood and saw us in our yard. She said ” this is going to sound strange, but… have you heard weird noises in the woods?”

I said YES!!!! So now I knew that I wasn’t alone… someone else had heard it too. Things kept progressing, hitting the balcony, hitting the house, hitting the garage door… all around my bedroom.

As I would take my dog out at night, sometimes the minute I would step foot on the front porch, there would be a knock from the other side of my driveway. This happened often!

One night, I was out with my dog, and I could hear an Owl… It was crazy loud!! It was making all kinds of noise, then it ” messed up” and it’s voice cracked. I started to walk toward where it was coming from. It was on the other side of my driveway at the tree line.

I really don’t know how to describe it.

I quickly went back inside. My husband was home and he heard it. But I know it wasn’t a typical owl because I hear them all the time.

I’m not sure chronologically what happened next, but the weirdness kept up! One night, my dog went crazy! He took me to the other side of the house… the garage side and took me to the outside door to the deck.

We both went outside. I was leaning on the railing, looking around when something huffed at me… well it was like a huff and a growl combined. I was standing there not believing what was happening! Then off to my left, a tree branch snaps off really high up in a tree, and falls to the ground.

The dog didn’t make a noise, and we both just turned and went inside. I locked the door and prayed that nothing was going to bother me. The next thing that happened was we had just gotten a new puppy. We lost our old dog, so after a bit, we got a new pup.

He was just learning to listen and was very impulsive. We were standing on the driveway, and and all of a sudden, he took off thru the woods. I went after him. We have about 4 acres, 3 of which are wooded so he was gone on an adventure!

I followed him down they the woods, then caught up with him, and brought him back home. I didn’t go back the way I had initially gone out. I came back to house at a different angle. When I got almost to the house… it saw tracks EVERYWHERE!!

I started to study them… there were 4 different sizes!! I took pictures and I put baby powder in the foot print, so it would show up.

I couldn’t believe it!!!! Footprints everywhere!!

I went and got some casting material and casted a few! Anyway, I was getting tired of all of this.
The next time the Balcony got hit, I lost it! I went out on the balcony, I was crying and I screamed at them! I told them they were Scaring Me!

I found the footprints in the daylight. Everything else had always been 1am-3 am.

After this, no hitting of the balcony… ever again!

Then the shooting started behind my house… during that same time Period 1-3 That went on Multiple times s week. A few days later I took the dog for a walk, and I noticed that a strange tree structure was on my property.

One last thing… not long ago, I was on my balcony looking at the flying squirrels. They come to my bird feeder at night!
The had their babies with them and I was watching from my balcony door. They are pretty used to me so I can step out and they will keep eating. I didn’t want to scare the babies however. I wanted to video them so my husband could see them… he was traveling.

I got my flashlight and I was trying to bounce some light so I could video them. They had all gone up to the window above me so I stepped out to place the flashlight so I could hit them with enough indirect light to film them. I pointed the flashlight down to the ground… and I hit two ” things” that were very hairy sitting there watching me… maybe 8-10 feet from the balcony. One was in clear view, the other I could see off to its side.

It scared me to death!!! I got Inside the door and they took off… much like I did! I saw them for a few seconds but more importantly I had my phone because I was trying to take pics of the flying squirrels! My finger was on the button… and I got pics of it!
I was so shaken up I didn’t realize that I had the pics until I settled down. I have shown them to very few people… some say it isn’t , but don’t know what it is!

I saw it… it was covered in hair. It was on all fours and it had turned away from me so I didn’t see it’s face. I saw what looked like an arm. It had wide shoulders and a slightly pointed head. I think it was a Juvenile. There are more things thing happened over time, but I wanted to share my experience. Thank goodness I found you… I certainly learned what Not to do by listening to your Podcast!” 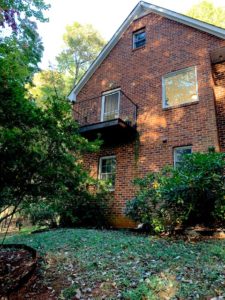 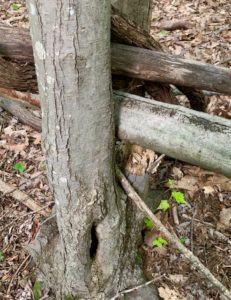 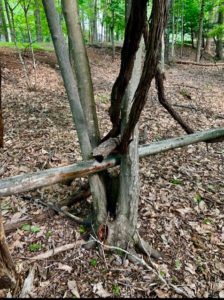