It was a late-night walk in a Raynham neighborhood silent and still, lost in sleep. Suddenly, William Russo’s dog, Samantha, began to shake and quiver — as he describes it, “rattlin’ like an old Chevy.” 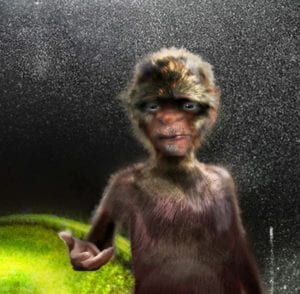 A sort of high-pitched wail. And then he saw it. Illuminated in the circle of a street light was a creature unlike any he’d ever seen: 3 to 4 feet tall, potbellied, big-eyed, covered in hair, unclothed.

Later, as he struggled to make sense of what he’d seen, Russo realized that whatever it was, it was beckoning him: “We want you, we want you . . . Come here, come here.”

Was the strange creature that William Russo encountered on a late night walk with his dog one of the dreaded Pukwudgies that the local Wampanoag Indian tribe fears? Here is his chilling eye-witness account.

5 Responses to “The Creature From Bridgewater Triangle”