Talon writes “I am a sergeant with the sheriffs department in Washington State. I’ve been a police officer for almost 12 years.

I have had encounters with sasqautch and have responded to a call where a logging operation was going on and everyone quit because they had rocks thrown at them screams and the sasqautch reached up 14 feet in the air and bent over a spotlight on a iron bar on the excavator over night. The main guy kept working but his employees wouldn’t come back. Ive also not only had my own encounters with sasqsutch but have talked with others in law enforcement and my entire life I’ve experienced paranormal encounters with all sorts of stuff.

I have no issues talking about anything because I don’t care if people think I’m crazy. Our entire justice system relies on eyewitness testimony and nobody can provide absolute evidence that sasqautch and other things don’t exist.

Casey writes “My friend recently put me on to your podcast and they are great! She told me that I should share my story with you. It was in Tennessee around 91 or 92 I think and my whole family saw it. It was a massive white one. I would be happy to share the details of the account with you.”

Raul writes “I have wrote you in the past about an audio Sasquatch experience I had but I I thought I’d mail you this ufo experience I had as well after hearing how open you are for those stories as well. This was 4 years ago in summer of 2016. My wife and kids were visiting my best friend who owns a cattle ranch in Northern New Mexico an area called Canoncito’ De Manuelitas. A beautifully forested area between Las Vegas NM, and Mora NM and part of the Southern Rockie Mountains.

We had spent the evening out with some hippie friends on another property with a zip line and were just having fun around a campfire with guitars and banjos. We were drinking beer and had a little of smoke but we weren’t on anything else.

It had gotten late and beer was running out so we decided to go back to my friend Benjis ranch where he said he had a 12 pk stashed and a little Jameson Whiskey. We proceeded to drive in his truck through a path that he had carved himself through woodland back to his property. When we got there it was around 1230 am he parked his Silverado high on a ridge behind his ranch house. It was a full moon and from where the truck was parked when your eyes adjust you could see fairly well even at night. Benji got down first and headed to the house to get us our drinks. My wife Gabby and I stayed out on the bed of the truck smoking a cigarette. We could see cattle and a couple of his horses in the field down below us with the illumination of the moonlight. We were just taking in this beautiful night that was starry and bright but had patches of clouds littered around the sky. When suddenly I felt Gabby slap my chest and say look I turned and to my amazement we were staring at this fiery orb about the size of a beach ball coming out the woods from the other side of the valley. We were both in awe and just stayed there leaning against each other and watched this orb dance above the heads of the cows to which seemed oblivious to this orb. We were both yelling some expletives as this lasted about 30 seconds then it flew in to the tree line and vanished.

This were it gets crazy. Benji shortly a few minutes later comes back to us in the truck with beers in hand and hears us yelling at him about what we just saw. He immediately tries debunking what we saw. Saying things like it was someone with a lantern or it was a guy on a motorcycle or a car with 1 headlight. And we were like “No dude we know what we saw, and it was not anything like that dude it was an orb!” He then says ” yea maybe your right there alot of weird things that happen here but I try not to pay to much attention to them cause it Fucks with your mind”. Then seconds after he says that it’s like you snap your fingers and Boom !!!! All of a sudden there was this huge UFO right above the field were the cattle were just hovering there and it appeared out of thin air. It was huge like a 4 story building and long like a foot ball field but oval in shape.

It was not flashing lights or making alot of noise just emitting a real low hum you could feel almost inaudible but with your body you could feel its presence. It was absolutely terrifying. You could see it because it blocked out the clouds and stars behind it. It looked almost how water looks at night at a lake when the moonlight is reflecting off of it and it was hovering and moving in a circle slightly. I felt like a hopeless mouse staring at a cat about to pounce. Or just so helpless and insignificant it was truly weird. Like a minute passed and not any of us said a word, we were just huddled together staring at this thing scared. When something inside me told me to pray. So I started praying to Jesus and his Angel’s and asking for the help of the arch Angel’s because I had read the Book of Enoch recently. Then soon after that this craft breaks into 4 separate vessels and flies towards the mountain and just vanishes as suddenly as it had just appeared.

Needless to say this encounter sobered us up quick. I could not sleep after that. And we were all like “did that just happen!” This experience changed my life and since then i have been on a quest for knowledge in regards to this phenomenon.” 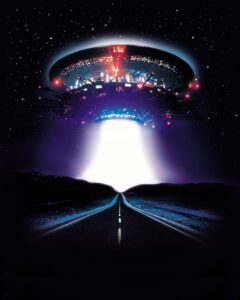