Cater will be returning to the show, he has investigated and created many eyewitness reports for the BFRO. This is part two of our conversation.

Carter writes “For those that believe, or want to believe, this book should be a good place to start. I cover basics of investigations, mine, and others theories, as to who they are and what they may be capable of behavior wise.” 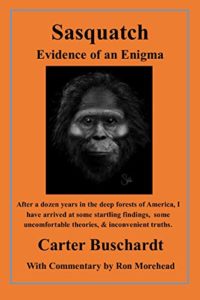 70 Responses to “SC EP:694 Sasquatch Evidence Of An Enigma II”