Timothy Renner and Joshua Cutchin will be my guests. They co-authored the book Where the Footprints End: High Strangeness and the Bigfoot Phenomenon, Volume I: Folklore. It is available on Amazon. 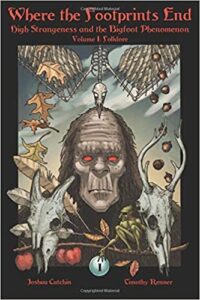 Our forests seem to be hiding something much more complex than an undiscovered gorilla. Bigfoot may be howling from a lonely mountaintop, but the bigfoot phenomenon is whispering secrets… if we will only listen.

Eyewitnesses, investigators, and cryptozoologists worldwide contend ample evidence exists supporting the survival of large, hairy, apelike creatures alongside mankind today, lurking in the wilderness. By all appearances, these beings seem wholly natural, interacting with their surroundings and leaving behind hair, blood, droppings, and, of course, footprints.

“Impressively, even exhaustively researched, Where the Footprints End should give all students of the anomalous serious pause for thought. By documenting both the high strangeness that surrounds Bigfoot sightings, and the deep folklore in which they are embedded, Cutchin and Renner so far broaden the context of Bigfoot encounters that it is no longer possible to credit any single theory or literalistic interpretation concerning their nature. Indeed, we begin to suspect that the reality of Bigfoot is less a problem to be solved than a mystery to dissolve our view of reality itself. Here at last is the book that dear old Bigfoot deserves.”- Patrick Harpur, author of Daimonic Reality

“This book poses a danger to the foundations of cryptozoology. While mainstream Bigfoot investigators would have you believe that people around the world are merely encountering a lost ape, Cutchin and Renner dig into the details they’ve swept under the rug, excavating countless Bigfoot reports involving glowing orbs, telepathic communication, and paranormal phenomena that have more in common with tales of ancient gods and alien abductions than they do with primatology. Meticulously researched and backed up with a treasure trove of footnotes, Where the Footprints End is poised to do for Bigfoot what Passport to Magonia did for UFOs.”- Greg Newkirk, Director of The Traveling Museum of the Paranormal and the Occult & Executive Producer / star of Hellier