Winston writes “I had an encounter in 2010 from central Texas. I saw this thing from head to toe….within 30 to 40 yards from me. No obstructions between us. I seen it all….muscles moving under the fur, the mid tarsal break halfway up the foot, it’s face….everything.” Spoke to the eyewitness and he said “I was heading towards my deer blind and I smelled what smelled like a dead animal. This thing was looking in my deer blind….I was shocked…” 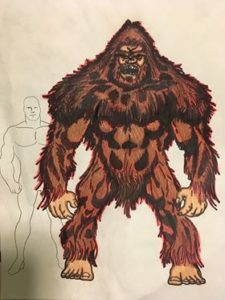 I will be welcoming Pat to the show who is a military veteran from Canada. He will be sharing his Sasquatch encounters with us. When I spoke to the witness he said “I wanted to tell you about this strange black dog I had a run in with in Afghanistan. It was jet black and seem to show up out of no where. I think it was more of an entity than a dog.” I have heard about two dozen accounts of veterans describing these large jet black dogs in Iraq and Afghanistan. I have searched the web but it is hard to find any information on it.

84 Responses to “SC EP:620 This Thing Was Looking In My Deer Blind”