Tonight I will be talking to three guests. My first guest Adam is from Florida and will be sharing an encounter he had with his parents while driving. They saw a Skunk Ape on the side of the road. Many years later Adam and his brothers ran into something much worse. 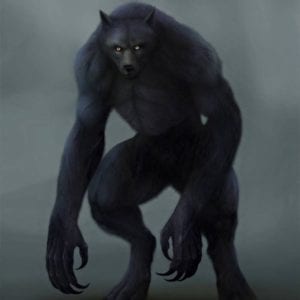 Jack writes “I am a retired U. S. Army (Rank Removed). I have had three combat deployments, including one as a commander in Iraq. Here is a synopsis of my encounter…

It was the summer of 1988. I was a cadet (officer in training )through ROTC in college. I was at Ft Lewis, Washington for the summer. We were on maneuvers in the woods early in the morning. Our platoon was being trained by two Army Special Forces Non commissioned officers.

We were on patrol in the middle of nowhere… probably 10 miles from the housing area of base. We had been choppers out as part of the training exercise. I still remember the name of the training event… “Adventure Challenge.”

While out in the woods on patrol, we all heard something walking parallel to us. I was so dark- I could not see my hand! This thing continued walking… crunching while we walked, stopping when we stopped. Finally, our green beret instructor went out there. After about a minute, he comes running back telling us to get out of there. All we had were M16s with blanks… we were training, so no live ammo. I have more to tell if you want to hear.” 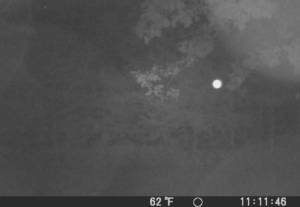 Emily writes “My husband and I had an encounter with something large in the woods of Southern Missouri on June 2nd of this year. In the afternoon I heard a huge tree fall in the woods in the direction of the river about 5 minutes after my husband left me at the camp to walk down to the water. About 30 seconds to a minute after the crash I heard 3 tree knocks, a pause and then 3 more with the same pattern on the opposite side of the river. A couple of times we heard snorts that sounded like wild hogs but never saw anything.

I had gone to the tent around 10:30pm. My husband stayed around the campfire until around midnight. He went into the road after putting out the tiki torches and fire and heard a growling. He is not one to be freaked out by noises and such but he was a little unnerved by it. He got into the tent and told me about it. We talked for a couple minutes before saying good night. Less than 5 minutes after we stopped talking we both heard rustling in the leaves from a distance, we both lifted our heads and listened intently as the footsteps came closer. We both agree the footsteps were heavy. I have hunted in the woods before and it was not a deer. I would describe the sound as walking in the woods with boots on. My initial thought was maybe this is The man we rented the camping site from messing with us and it’s part of the experience, but then realized he would be stupid to do that for fear of being shot. Bigfoot never crossed my mind. I was frozen in fear! It walked directly behind our tent. Probably within 3 ft of our heads. It sounded like it walked around the campfire ring and then off into the woods toward the water. We were absolutely silent while it was in the camp. As soon as we realized it had walked away, I began shaking uncontrollably! I have never felt fear like that and have never reacted to fear that way. My husband was trying to reassure me when we heard it returning about 2 minutes later. I grabbed the key fab to our van and hit the lock button so the lights would light up and hopefully scare away whatever it was. I did that 4 times and it walked off into the woods on the other side of the road behind our tent. We heard what sounded like a fight going on between two animals in that direction and I hit the lights again a couple times and the noises stopped. I knew I wouldn’t be able to sleep in the tent anymore so we moved into our van for the rest of the night. I didn’t look for Bigfoot signs because again Bigfoot didn’t cross my mind until we got home that evening and we honestly thought it was probably a bobcat, but after looking at pictures of bobcats we both agree a bobcat wouldn’t be big enough to make the sounds we heard. My husband has never been a believer in Bigfoot. I have been a believer for years but have never had an experience like this. I played several videos of animal sounds for him trying to identify the growl he heard. He said no to everything except supposed Bigfoot growl. He said that is very close to what he heard. In the same video of the growl you can hear footsteps of the creature and they sound almost identical to the steps we heard that night.

We heard snorts again the next morning but could very well have been hogs. I sent a text to the owner the next morning asking if he knew what it might be. He said most likely deer…or Bigfoot! Then he listed several other animals he knew were on the property. I know none of the animals he listed could make those sounds…except Bigfoot.

I haven’t been able to stop thinking about this experience since it happened. A couple days after we got home I sent a text to the owner of the property and told him about the experience and asked if he had ever had any experiences and if he was serious about his Bigfoot comment. He said he was intrigued and wanted to know more so I shared our story. (I get the feeling he knows more than what he has told us) He said he did catch something on his trail cam the night of June 2nd and then directed me to his Facebook page where he had posted it. It was an orb. The time stamp says 11:11pm. 45 minutes before our encounter. I thought it was creepy!  I’m convinced more than ever that it was Bigfoot that visited our camp that night. I just had to share!”