A listener writes “I shot one in 1995 deer hunting in the area around Oregon caves out of cave junction where I live. Have had a few other encounters and photos of footprints while hunting wild mushrooms, let me know if you are interested…”

He said he was hunting and the night before they kept hearing someone or something around their camp. The next day he found a large boulder to sit on that over looked a clearing. He sat for awhile… then something stood up. The witness said “He was looking directly at me and I could see everything. I do not remember chambering a round. This thing started running so fast and I started shooting. I know I hit it 3 times in the back. It fell to its knees and got up and just ran off. I realized it was running in the direction of our camp and my friend was at the camp. I heard my friend start shooting. I ran back to the camp while it was leaving. The following night was a nightmare. Several of these things showed up and they were mad. I fired off almost all the ammo I had that night. The next morning we left. There are other things that happen.”

Our second guest writes, “June 2009, early summer here in West Virginia. I lived in Ohio County on the outskirts of Wheeling. Which I know is a major city, yet it’s surrounded by thick tree on top of tree strangling wilderness.

I lived approximately five miles outside of town back in the rural suburbs on a gravel road with two other neighbors. The property line of my house pressed right up against the Spidel Golf Course of Olgebay Park. I could see the 18th hole flag from my porch. There is a large tree in the middle of my yard, the yard itself slopes downward it’s some what of a hill. A few things happened leading up to this encounter, now I’m not gonna say I never believed in Sasquatch. I’m an open guy, I’ve had some run ins with the paranormal. From things that happened in my child hood to my early adult life. Yet I thought that this was a Pacific Northwest phenomenon, I had never heard of these creatures in Appalachia. If I knew now what I knew then, talk about going down the Rabbit Hole. All that opened up to me after seeing these things. I can’t rightly remember what day it was, all I know is it was around 10 pm. And my wife at the time, and I were about to leave the house and go to Blockbuster before it closed. I walked out onto the porch and let my cat out, he was a big ole tabby. And wasn’t afraid of damn near anything. As I walked down the three steps of the porch, I saw a flash of white and my cat had zipped back up the stairs and straight back into the house as I had left the door open.

I just shook my head and began walking the path around to go down the other stairs to where we parked the cars. I stopped in my tracks, this overwhelming feeling of being watched. I’m not gonna lie I was petrified, yet I lifted my head up and started scanning the barrier of thickets and bramble that marked my property line. I saw some eyes looking back at me, the light from my porch making these eyes shine an orange like color, almost red. I stared at it, as it stared at me. I was about forty feet from the creature. It stood leaning against a tree, not just leaning it had on arm wrapped around the tree itself and even as it stared at me it would slowly rock to the side. I myself couldn’t move, I was frozen in place and the fear that gripped me. Was unlike anything I had ever felt before. It didn’t make any threatening motions, nor did it purse it’s lips or any of that monkey stuff. It was ape like and yet humanlike. The stare down only lasted two minutes, but it felt like an eternity. My wife called out to me from inside the house, the creature took it’s eyes off of me and looked towards my doorway. I too looked back at the door way, and then my head snapped back to the creature. It was no longer standing there, it was now walking away up a rolling hill side. In the light of the moon I could make out it’s back muscles and butt. It was like a guy on steroids. It kept walking until it disappeared into the tree line at the top of the hill.

I tried to tell my wife about it, but she just thought I was trying to scare her. She would eventually believe me, as this wouldn’t be the last time we saw it or others. A few weeks would pass before we saw anything more, but upon seeing it. It opened my eyes up even more to the on goings around me. From the sounds I heard to things, I would notice. From something slapping the house in the middle of the night, to finding big rocks on the roof of my back porch. Blood curdling screams, that sounded like the came from not to far away. I’m not a hunter, but I do know the woods around me. I am however an avid fisherman, and I spend a lot of time down on the Ohio River and the creeks that bleed into it. I was a boy scout as a kid and we had to identify animals and their traits to gain badges. And I’m telling you there is no animal like this animal out there. I tried telling my family, my dad said no such thing. And my mom had a good chuckle. I apologize for not giving you more to go on. Hope to hear from you soon.”

And our final guest writes, “We have had several strange occurrences during the past two years. The following have been occurring:Our dogs in our kennel have been barking non-stop all night, every night for the past year up to about 3 weeks ago (see below).

On one occasion, one dog kennel (chain link fencing) was smashed in as if a bear or other large creature had tried to get at the dogs. We have had bear sightings in the past two years. However, that bear was shot and killed by a local farmer about 1 1/2 years ago (prior to this incident). No other bear activity since that time to our knowledge.

Our next door neighbors have also heard whoops and other odd noises. The gentleman that lives there is a true frontier-style woodsman and has lived on the land all his life. As an avid hunter and outdoorsman, he is extremely familiar with the land and surrounding properties. These are noises he is unfamiliar with and has never heard on the property before.

My wife and I have heard whistles, whoops, grunts, and tree knocking. Upon arriving home one evening, there was a very loud tree knock as we exited our vehicle. We have heard what sounds like two men having a muffled conversation behind our home a few times. Often, after dark specifically, there is an occasional wet dog/skunky smell in the air and noises in the surrounding woods.

Our motion sensor lights have been tripping almost nightly (until 3 weeks ago). On the property and surrounding properties, there are large rock formations that are tall and deep enough for animal dens.” 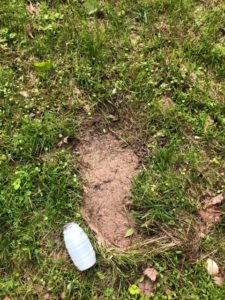