Bill writes “Wes this sighting took place when I was a teenager. I’m fifty two now and I still remember it for the most part. Me and a buddy was on are way to are favorite fishing spot at the time. We lived near a dam. It was late summer.

So the dam was low which maybe accessing the inlet possible. Now above the inlet was miles of private land that connected to next dam that was located in the mountains. To access the inlet you had to hike down into the bottom and walk through bottom ground that is underwater in spring. Well we were crossing a fence on the high side and as I crossed over I looked ahead and below us toward are destination in the tall willows I saw something bent over low digging or scraping in the dirt. It was hairy reddish color. I stoped and was trying to figure out what I was seeing about that time my buddy looked and saw what I was looking at. At the same time the creature must have heard us. To this day I remember this point and will never forget it.

It stood straight up still with its back to us kind of turned a little glanced at us and took off running through the willows and brush up through the bottoms through crap so thick a man can’t get through. Just ripped right through it and disappeared. I’m pretty sure we saw a big foot. If you would like to talk or want more info email me.”

Carl writes “Im a retired deputy sheriff and have had 2 road crossings as well,and have heard the wood knocks and whooping noises. I even had a large tree about 75 yards from me pushed over on a calm day while deer hunting. As i became aware i realized id experienced them around me my whole life.”

Chris Merola and he has agreed to come on the show. He describes buying a cabin in the woods of Connecticut that no one lived in for 11 years. He said when he first moved in he was terrified because of the things he was hearing outside late at night.Chris says “I setup trail camera’s all over the property trying to get a picture of these things and I never got any pictures of a Sasquatch. Frustrating….I finally decided to put one camera on my door behind the screen door. I captured what I think is one of these creatures. Here is the video.

If you skip ahead to about the 5min mark you can see something move from the middle of the screen to the right. It is not conclusive but it is very interesting. Especially knowing Chris lives in the middle of no where and he was trying to bate these creatures with food. Chris goes on to say “I am not the only one who has heard and seen them in the area. We were screamed at by one of them and both my son and girlfriend ran into the cabin. I have seen them numerous times. I have also seen some very strange and weird things from these creatures. I do not know what to say, I do not think they are from here. My opinion of course.”

Chris documented the incidents that happen over the years to him at his cabin. He wrote a book called The One Who Runs and Hides: A True Story. Check it out on Amazon. 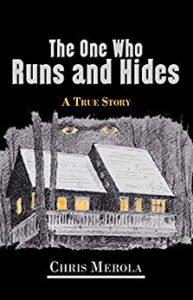 It is hard to put everything that happen into an hour long show and for some of the listeners some of what Chris has to say might rub you the wrong way but I can tell you a lot of what he talks about lines up with witnesses I have spoken to including the two brothers (We need help show) in Indiana.