Join us in celebrating Sasquatch Chronicles’ 500th episode on Friday, December 21. We’ll be welcoming Les Stroud to the show, and he sits down to talk about his journey as Survivorman and what lead him there, what he’s up to now, and of course, Sasquatch. Les will share with us some never before heard experiences, his opinion on what the creature is, and will give us some firsthand insight into some of the most memorable moments from Survivorman: Bigfoot.

Les Stroud is a Canadian survival expert, filmmaker and musician best known for his hit television series “Survivorman,” where he uses his skills and knowledge to survive completely alone in the wilderness for up to 10 days with limited or no ready access to water, food, and supplies. He is the “only producer in the history of television to produce an internationally broadcast series entirely written, videotaped and hosted alone.”

Les began his rich career as an outdoorsman in 1990 as a guide for Black Feather Wilderness Adventures leading canoe excursions into the Northern Ontario wilds. The time he spent there would lead him down the path to creating his first documentary, Snowshoes and Solitude, which was named “Best Documentary” at the Muskoka Film Festival and Best Film at the Waterwalker Film Festival. Stroud would go on to produce a collection of “specials” for The Discovery Channel Canada which laid the groundwork for “Survivorman” as a full-scale series, spanning 7 seasons and inspiring a long list of subsequent “survival”-themed television programs.

His interest in the “Sasquatch Phenomenon” (as he likes to refer to it) began at a young age and continued to grow as he spent more time in the outdoors, especially in remote locations which offer few, if any, concrete explanations for some of his more mysterious experiences.

Stroud dedicated an entire season of Survivorman to the mystery surrounding Bigfoot. He started the journey from a skeptic’s perspective – equally questioning and open-minded – in the pursuit of bringing legitimacy to the discussion of whether or not Sasquatch exists. He remains actively interested in the subject, subsequently conducting a handful of interviews expanding on his beliefs and divulging details from some of the unexplained encounters he’s had while out in the wilderness.

To find out more about Les and what he’s currently up to, connect with him here: 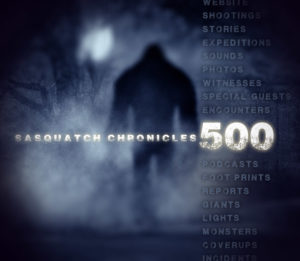