My guest tonight is Timothy who is an author and he wrote “Beyond the Seventh Gate: Exploring Toad Road, The Seven Gates of Hell, and Other Strangeness in York, Lancaster, and Adams Counties” We discuss his research and you might be surprise to hear from his finding. People in the area say this area is haunted, they would report rocks being thrown, strange screams and chatter. As he spoke to several of the witnesses he became convince this was more Sasquatch activity than any sort of haunting. He shares with us witness encounter stories including a man that claimed to have been attacked.

Tim writes “One of the best known legends from York County, Pennsylvania is Toad Road and the Seven Gates of Hell. What is the real story? Where are the Seven Gates of Hell? Where is Toad Road? Extensive research and on site exploration is combined to dispel urban legends while revealing stranger truths. Journey beyond the Seventh Gate and into other weird places in York, Lancaster, and Adams Counties. Explore Hex Hollow, Chickies Rock, lonely graveyards, and old iron forges. Read true tales of bigfoot creatures, witches, ghosts, werewolves, and flying phantoms. Sometimes they haunt the woods behind you. Sometimes they are in your own back yard.”

When Tim first started researching this topic, he would speak to witnesses who called the creature “The Hidebehind” they did not use terms like Sasquatch or Bigfoot. The lore behind the Hidebehind is “A Hidebehind is a nocturnal fearsome critter from American folklore that preys upon humans that wander the woods, and was credited for the disappearances of early loggers when they failed to return to camp. As its name suggests, the Hidebehind is noted for its ability to conceal itself. When an observer attempts to look directly at it, the creature hides again behind an object or the observer and therefore can’t be directly seen: a feat it accomplishes by sucking in its stomach to a point where it is so slender that it can easily cover itself behind the trunk of any tree.

The Hidebehind uses this ability to stalk human prey without being observed and to attack without warning. Their victims, including lumberjacks who frequent the forests, are dragged back to the creature’s lair to be devoured. 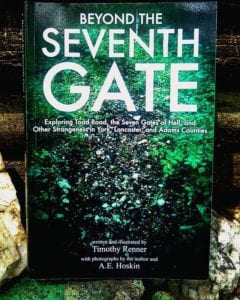