Jeff writes “We live out in the country, on a one lane dead end road, most parcels out here are 5 acres or more. This is rural area, horses and cattle are common. Deer are common with the occasional mountain lion or bear wandering through the neighborhood.

No street lights, when it gets dark it is dark. If you look at the paint “thing” I sent you the driveway comes into the picture from the upper right corner. It is an uphill slope to the pad where the trailers are parked next to each other and my tractor is parked as shown. In the lower left corner the building ends and you could drive a car back there. The shop is 32 wide and 50 long, and on the other side of the shop, out of the pic, is our house.

Last fall I installed a Ring motion sensor with two LED floodlights on the back wall of my shop. This thing is up on a wall, it is about 12 ft off the ground, and I have got it pretty dialed in as to not activating on deer, etc. It rarely goes off. I installed it because we had some tweakers in the area for a while. The driveway out to the county road from the parking area is about 300 ft.

So at 430 am on the night this all happened my phone alarmed with the Ring motion sensor. I was half awake already anyway, and grabbed it and opened the app. The sensor had turned on the LED floodlights, which are very bright and cast a typical LED color light, very white and very powerful. I saw what looked to me to be a flashlight, brighter than the floodlights, about 4 ft. off the ground coming into the area from the driveway. I am a retired Sheriffs Sergeant, and was immediately fully awake, thinking I was seeing a guy walking on my property and headed towards my shop.

As I was watching this the light arrived at the driver’s corner of the trailer, which is a 35 ft 5th wheel. I could not see a person, and if there was one there I would have been able to. This was simply a light, moving about. At that point it raised up to about 15 ft. off the ground, and it “turned on” another light, pointed towards the ground. In contrast to the LED floodlights and the intensely bright light this thing was, the light it was pointing down reminded me of the beam a cheap old school 2 D cell plastic flashlight would put out. At this point my wife woke up and she and I watched this thing together for a couple of minutes.

By then I was starting to think someone was flying a drone on my property, and I was getting pissed. We watched it hover for a bit longer, then it flew down one side of the trailer, with the light on the bottom illuminating the trailer roof, and then back up to the front of the trailer. Then it looked like it did the same thing over the flatbed car trailer parked on the other side of the fifth wheel.

I handed the phone to my wife, I told her to watch the camera and that I was going to go see what the hell was going on out there. I got out of bed and grabbed a handgun and a flashlight and went out the front door and walked the 75 ft or so to the front of the shop. On the paint thing the yellow line is the path of the light up onto the parking area, when it changes color is when the “searchlight” came on. My path is the blue line.

I stopped about 20 ft from the corner of the building for a few seconds to listen, thinking I would hear the sounds a drone makes, but heard nothing. It was very quiet; a storm had gone through in the night and everything was wet. So, I rounded the corner and saw nothing. No light source, no light. I searched the area for 5 minutes or so, I found nothing. I went to the left rear corner of the tractor and stood there for a few minutes, but came to the conclusion it had left the area, and at that point I was convinced it was a drone and the operator had flown it out of the area before I got out there.

I went back into the house and to our bedroom to find my wife wide awake and very agitated. She said “didn’t you hear me talking to you? I was yelling at you, didn’t you hear me?” —the Ring App has a deal where you can use the phone to talk to the “device” to scare the bad guy away, I guess. She had seen me talk on it but did not know you had to turn the talk feature on, so I was hearing nothing she said.

Then she told me that the thing had reacted immediately to my presence when I came into view around the corner of the shop. She said it climbed another 10 ft into the air, and hovered there as I made my search of the area, checking behind the trailers and looking behind the building. She said that when I finished my search and went to the back of the tractor and stood there the thing flew directly over my head and stayed there. She said it put its “searchlight” right on the top of my head, and she could see the searchlight illuminating my head with the different colored light it put out.

I was oblivious to all of this; I never saw or heard a thing out there. The whole time it was pointing its light at me I was thinking the damn thing was gone, that it had left the area.

She told me it stayed right on top of me until I left to return to the house. That when I did leave it then went to a central area and hovered again, with its searchlight on and pointed down at the ground. She then showed me my phone, and the damn thing was still out there, hovering near the front of the 5th wheel, with its searchlight still on.

I don’t know when it left the area or what direction it took, I had to shut the app off to get it to stop activating, whatever this thing was it was real enough that the motion sensors in the Ring Device picked it up. I couldn’t see the thing when out there, and she was at this point freaked out when I suggested that I take the phone and go back out there she got very upset, so I didn’t go.

We don’t pay for Ring to record what the unit sees so I have no record of this. My wife and I felt certain the thing would return, so we developed a plan that she would use her phone to record the screen of my phone if this happened again, and I showed her how to use the talk feature. We were 100% ready for this to happen again.

It hasn’t. The system hasn’t picked this thing up out there since, and it has been a couple of months. It is still on my list of “what the heck was that”. Like most cops, whether they will admit to it or not, I have seen my share of weird stuff, stuff I can’t explain, but this one…this is different for sure. This light thing people talk about, and that you have seen…it is real.

I know this was a long-winded note, I don’t know any other way to tell the story and have it make as much sense as it can. We shared it with a very short list of friends and while they didn’t call us crazy we could tell it made them uncomfortable so at this point we don’t bring it up.” 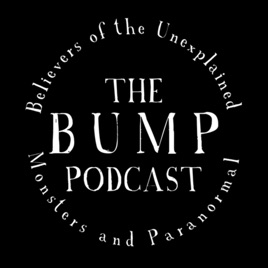 We will also be chatting with Bo Kennedy from The BUMP Podcast. Bo will be sharing his encounters with us.

The BUMP Podcast is a place for Believers of the Unexplained, Monsters, and the Paranormal to share ideas and encounters about all that goes BUMP in the night.