Allen writes “The Green River was dammed up to create an 8,210 acre lake, “Green River Lake.” During this time my friend’s family owned land on green River. Naturally, As the lake filled up, many caves in the area were flooded.

We think that’s what drove the Sasquatch in this story out into the open and searching for new territory. My friend and his cousin came down to the riverbank to do some target practice with their 22 rifles. They would walk up stream a ways, throw pop cans in the water, then run back down stream and wait for the pop cans (targets of choice) to float by. While blowing the cans to smitherines, my friend’s cousin’s gun jammed. They walked around a tree line, across a field and back up to their car which was sitting on the side of the road. They opened the trunk, sat on the back bumper, and began to dislodge the shell from his 22 rifle. As they were reloading they heard limbs snapping, they looked up and back toward the tree line they had just walked from. The tops of the trees were swaying wildly. My friend’s cousin asked, “who let the elephant out?” They decided to check it out. They closed the trunk and jogged back down across the field then walked quietly around the line of trees and back into the opening on the river bank where they had been standing moments before. “Sam” not his name..said when they came into the opening something started screaming at them. They jumped and looked toward the scream….Standing on top of a deadfall was a creature covered in hair, his arms were above his head and he was waiving them back and forth in a left, right motion. Sam’s cousin spun the barrel of his rifle around and shot 5 times.

Sam said all five shot’s hit the creature in his chest area. He said he could hear the bullets landing almost like the sound of them hitting the water. The creature dropped his arms and fell straight back behind the deadfall. He hit with a large thud, then silence. The silence was very short lived. Sam’s cousin, started screaming, “I’ve killed our crazy uncle” “I’ve killed our crazy uncle” “I’ve killed our crazy uncle” “He dressed up in a monkey suit to scare us and I’ve killed him.” Sam told him, I don’t know what you’ve killed but it’s not our uncle. They were both in shock so holding onto each other they walked slowly over to the dead fall and looked over it to the back side. The creature was laying on its back and not moving. One of them (not sure which one) said, what the heck is it? This stirred the creature, he opened his eyes and jumped up. They jumped back, turned and started running. The creature “galloped” away in one direction, the two cousins in the opposite. I say galloped because of the way he was swinging his arms. 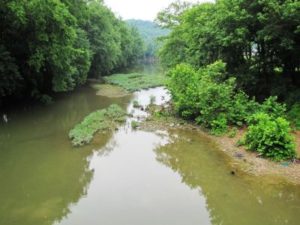 Jeff writes “Friday 8/9/2019 myself and 3 friends all last minute decided lets take off on an impromptu last minute trip just an out back in the night to go do some Bigfoot Searching. We all love the outdoors and are into Cryptids. We all meet up at my place and set off from Federal Way, WA at around 7p.m. We had a clear and specific place in mind where we were headed. It is a place I have camped at for over a week before and not far from where one of us had an encounter a few years ago. Was a dark and weird night and I say that because there was only overcast and a storm rolling in causing it to be pitch black darkness. No moonlight, no starlight… nothing. We were in very close proximity to Mt. Rainier National Park off of Skate Creek Road and onto a Forest service Road#52 and then onto #84 in the High Rock Lookout area. We parked the van in a very specific spot I was very familiar with because I had camped this exact spot for over a week just a couple of years ago. By this point the sky is flashing from the lightning storm in the distance followed by no sound of thunder it was way off from us still at this point however the sky and cloud cover was acting as a projector of sorts in that these flashes were having a strobing effect i guess you could say. It was a quick flash to where you could see around only for a split second. Very creepy and mood setting but we didn’t care and were excited just to get away from work for the weekend and be out here just the guys even though it was an out and back type of thing. We get our gear on i.e. our firearms, jackets, and headlamps etc.

After we finish gearing up it is at this point we shut the van off and all light sources and really take in just how quiet and dark and I mean eerily quiet and the darkest dark you can think of dark, the type of darkness where you can’t see your hand in front of you. The only light now was lightning. We then turn the key to the Aux setting and dial that car stereo up to the maximum setting and proceeded to play some vocalizations. It was a short audio clip that we played at least 4 to 6 times and waited in silence and….. Nothing. We then left the van and headed off on foot down the service road. My buddies were a little nervous which was understandable the atmosphere was a little unsettling. However, I was not at all nervous or anything because this place was familiar to me as I essentially lived here for a week a couple of years ago. I know where the road leads to and that when you reach the end you will know as it dead ends. I am now in the front with a headlamp my buddies are behind me and not being the quietest of people and that’s when they stop and say they here something to the right as though something was following us and was walking when we walked. I told them that they are crazy and they aren’t hearing anything and we laugh it off and proceed down the road. Pretty uneventful really. We reach the end of this road which opens to a clearing and clearly a spot people have shot at in the past. By this point that storm is over the top of us and the rain is coming down and the timing of lightning too thunderclap is only a couple of seconds. We decide we better head back to the van. Minus the weather and the quote on quote thing pacing us nothing eventful at all really happened. We got back to van threw our gear in changed our upper layers because by this point we are soaked. We get in and start off to explore deeper into the forest and find another spot to park and search.

Weather wasn’t really agreeing with us on that and it was getting late. Next thing you know we zigged when we should have zagged and ended up on a very primitive road. Ended up turned around and lost for awhile until our driver found his way out and back onto the main Skate Creek Road. But let’s go back a little for a second, me and another friend are in the backseats and the driver and co pilot have windows down because we are all smokers so the heat is blasting. My friend sitting beside me asked them to shut the windows in the back because we are wet still and was chilly back there. So to be clear we are in a van with sliding doors on both sides and the only windows in the back that open only open maybe an inch outwards for venting. He tells us that they are closed and my buddy is now getting pissed because clearly there was a breeze and it clearly sounded like they were open. Finally we just dropped the window thing and proceeded onwards. Sorry I only bring up the windows and all that because what happens next. As I said before beside the weather and us getting lost etc. nothing eventful at all really happened, that is until we got back to my house. It was there that we discovered the cause of that breeze and reason for the whole window argument, one of the vans back windows had been broken. We only really discovered this as we were getting gear out of the van and noticed there was glass. GLASS? WTF happened???!!! That window didn’t break while we were anywhere near on in and or around the van. This is a window that only opens outwards on one side and the other sits in a metal housing track from top to bottom and the bottom of this track is bent outwards. Our initial thoughts were did something throw something at the window as we were on that walk? Did someone smash it and steal something? We looked and nothing was missing at all no bags no ammo no weapons nothing!!???

After some thinking we realized that whomever or whatever had broken that window would have too had grabbed the bottom corner and pulled it outwards and popped it. That would explain why that metal housing was bent. What we the noticed next was there was glass on top of the van?? We are all in disbelief at this and asking ourselves wtf could’ve happened and when? where? what?. It’s now 3 a.m. we are discovering this and we are all tired and wanting to get home but yet still talk about what could’ve happened. Once we grabbed our stuff and shut the hatch that is when I noticed it. We only noticed it because of how dirty that back windshield was and the light of my house down the drive way illuminating it…. What we discovered was a handprint with clear finger prints in the thumb the index finger and palm on the glass. The print is huge from base of palm to ridge just below the fingers was as big as my hand. In that and around that print we were able to recover a couple of hair samples. WTF HAPPENED LAST NIGHT!!!!!!????? Did those vocalizations send out a distress call that was answered and investigated as though one of their own was injured and or trapped in that van I don’t know!!!! 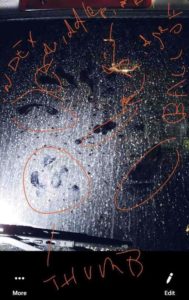 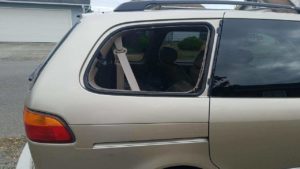 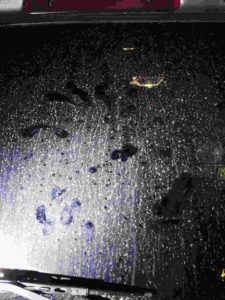 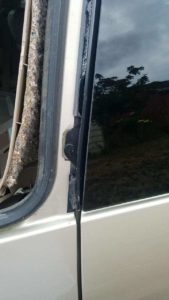 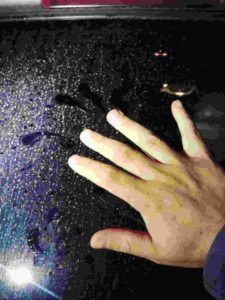