A listener writes “I live in Michigan and used to spend a lot of time in the Huron Maniatee national forest between Glennie and Barton City Michigan.

Have seen several strange things happen there. And had a very strange encounter with something one night while trout fishing there.

My friend had a hangover and went to the tent on the 2nd night and I went back out fishing. Shortly after I went back out fishing I heard a large branch break. I’ve never heard any animal break such a large branch. The creature kept working his way toward camp and the tent where my friend was trying to sleep. The branches kept breaking close to shore and kept getting closer to camp.

Eventually this thing got 25 or 30 feet from the tent and let out the loudest scream I’ve ever heard. Sounded like a female human but so much louder yet also sounded like a lion. No way could any small animal so that. No way a bear could have screamed like that. I could feel the reverberation in my chest.”

8 Responses to “Strange Encounter With Something”

A listener writes “I had an experience in the then Rhodesia (now Zimbabwe) when I was living there as a child. The year was 1973 and I was 11 years old. I was very fit and athletic for my age, having great get up and go energy.

I lived in the southern city called Bulawayo and we spent a lot of weekends in the Matopos National park area. The park is unique in being struen with round bolders that form what’s called a “kopije”.

I spend an afternoon climbing one to find caves and what’s in them. I was pretty good at rock climbing and was almost as good as a baboon, in fact I often tried to catch a troop of them with my cousin, running up the rocks but they were always 100 meters ahead of us. We were young and stupid and didn’t know how dangerous the baboons were but that often got us quickly to areas where we found caves. One afternoon I was by myself and had spent a lot of energy getting to a rock height, I noticed that there was a wonderful cave concealed back from the bolder face. In fact I smelt the cave long before I saw it. When I entered it, it was a treasure trove of old bones of all types of animals. There were no rock painting, in fact no human signs, ( normal in these caves). I found an intact leopard skull after only a minute of looking through the bones. All of a sudden I became acutely scared. 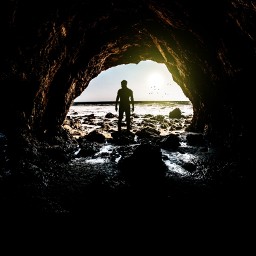 I backed out and then set about getting down this high Rocky outcrop. It was about 4pm in the afternoon, and I got really scared. I sensed some thing out of the corner of my eye. I though it was a big cat, like a leopard, but this thing was dark and hid in the shadows. I then leapt and bound down to the base of the Rocky outcrop and this thing followed me. It kept pace with me but every time I looked around I noticed a dark shadow that seemed to melt into the trees. I got the feeling that I was the prey, and as I ran through the long grass back to the dirt road I wondered why I wasn’t attacked. The musky smell followed me all the way till I was 1/2 a mile away from our lake side camp. I can’t put it down to any animal I know, all I know is that I was scared, and annoyed that I’d dropped the leopard skull with the impressive canines. Does Africa have a type of Sasquatch? Who knows, I met with something and I got into it’s territory and it played with me till I was out of there. I tried to get back to that cave because I really wanted that huge leopard skull, but I was never that bold about going into caves after that.”

4 Responses to “Strange Encounter With Something”