Rob writes “I am from the state of Georgia. I had a encounter back in February 2019. I had been scouting for some wild hogs when I came upon a smell that would run a buzzard off a outhouse.

Trying to find the source and looking down at the ground I caught movement to my right and looked up to see this creature some 80 feet from me. Dark brown eyes as dark as his coat. Scared 10 years off me.”

Spoke to the eyewitness and while scouting an area he came face to face with a Sasquatch. He said “I just could not believe what I was seeing, I think it was just as surprised to see me as I was seeing it. It looked at my gun and looked back up at me.” 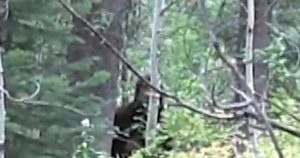 Howard writes “I wanted to relate to you a sighting I had as a child in Tahlequah Oklahoma. My mother originally from California was adopted by a couple who lived in this area. It is a beautiful region with the Illinois river literally in there back yard. We live in the central part of the state and as a child we would go and visit my grandpa Pete and his wife. They lived a cabin that they had built because Grandpa Pete was a Cherokee elder so everyone in the area was of Cherokee decent. This place was a kids paradise. On the day I saw the Man at the river I was 11 and my brother 13 we had went to play in the old cabin they moved out of a few years back. As I said you could see the river from the old cabin. We were just being kids and playing when my brother said look at the guy by the water. I finally figured out what he was looking at that’s when I noticed it was covered in hair it was about 100 yards away so detail is tough. My thought never went to bigfoot as I didn’t know what that was at the time Im now 48. Being a smart ass kid this guy was clearly on my grandpas property so I yelled HEY. This is where it all went south this man turned and screamed like the sounds I heard on the Jurrasic Park episode in east Texas. Then it bolted running down the tree line eventually disappearing. I really just thought it was a person so we started back playing as kids do when out of no where the neighbor come running to us ordering to get to the cabin. Once we got inside Grandpa Pete and the guy went back outside. They were speaking Cherokee so I had no clue. When Grandpa Pete returned he asked what we saw so we both told him the same thing. We were not aloud past the first cabin for the whole weekend when asked who the guy was he said the river belongs to them right now so don’t go down there they are just passing through.” 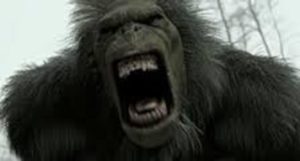