Spoke to Glen who is a retired law enforcement officer. Glen said “I was injured on the job so I have taken some time off. A good friend of mine and I decided to take a long hike down the Appalachian Trail. We were warned by the park rangers not to hike the trail, they made the comment “We don’t work in anything less than a 4 man team. A lot of strange things have been going on.” Now I didnt really believe in bigfoot. After the night we spent on the Appalachian Trail, I changed my mind on a lot of things. It still haunts me to this day.” 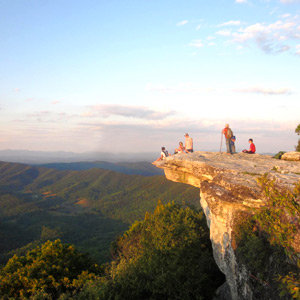 Aaron writes “Hey man my gf, and I had 2 interesting encounters during our trip to LBL. Went in with the intent to show her some wood booger’s, ended up running into what I can only assume was a demon/witch lady near a cemetery.My gf refuses to really talk about her because she had said hi to her as she walked past but the lady ignored her but looked up smiled and said hi back to me when I said hi. Her eyes were black but my gf describes her differently than I saw her said she got super cold but never saw her face her hair hid it but I saw short hair. Then later that night we went back in, and I believe around mile marker 26, 3 deer were off to the side of the road 1 was a really nice buck I slowed way down and in the corner of our lights we caught what I thought was a 4th deer so I didn’t think about it but my gf freaked and as I looked up this massive light grey/whitish dog creature leaps up what had to be a 30-40ft hill in 1 leap I was like wtf I stopped turned my light into the woods to follow the creature for a moment we lost sight of it. I looked at the deer, there eyes reflected yellow in the light but when I looked back into the woods what I originally past over as a tree originally looking in had reddish eyes in the light But it was tall I wanna say 9 maybe 10ft. I would like to know what you really know about that place. I did 10 years in the army, 4 of which were in a long range surveillance company. 13 months in Kandahar province among others, rural villages people would warn us of giants in the mountains, which really to me confirmed the Kandahar giant story to me the people genuinely were feared these things, and my buddies that had been in awhile all had some creepy stories So why not a big wolf man, wood booger’s, witch’s, etc. if you have any info on that area that hasn’t really been mentioned on the show I’d loved to hear back from you. Fascinated me that so many apex predators live in that area. I want to go back.”

105 Responses to “SC EP:526 Terrifying Night On The Appalachian Trail”