First spotted 45 years ago this month, the creature has been known to throw tires and scare teenagers.Real or imagined, the thing appeared to be “part man and part goat” with scales and long clawed fingers, witnesses claimed. It made the pages of the daily newspapers and whipped Tarrant County into a monster-hunting frenzy in the summer of 1969.They called it the “Lake Worth Monster.”

Even today, stories of the monster, also known as “Goatman,” can be heard around campfires in North Texas. Researchers have made documentaries and written books. Lakewood Brewing Co. even decided to pay respect with a limited-release Goatman beer.

“The stories are enduring. The lore is enduring,” said Michelle Villafranca, a natural resource specialist at the Fort Worth Nature Center and Refuge.

Villafranca organizes a Lake Worth Monster Bash at the nature center in October to celebrate the monster (this year’s bash is scheduled for Oct. 4). Along with being in charge of land management at the park, she’s become the go-to collector of all things monstrous.

On the windowsill of her office is an empty bottle of Sierra Nevada Bigfoot Ale. She has a book written about the Lake Worth Monster filed on her bookshelf right next to her field guides of local mammals.

“We have alligator sighting report forms; we don’t have any Goatman sighting forms. Maybe we should start,” Villafranca said. “After all, he is North Central Texas fauna.”

The summer of 1969 was hot and humid in Tarrant County.

Back then, the area near Greer Island wasn’t gated off like it is now. Teenagers would go down Shoreline Road around the lake to be alone and enjoy the freedom of summer nights.

On July 9, a group of three couples was parked by a clearing. Around midnight, a beast leapt onto their car from the trees above. The monster tried to grab one woman, but they sped off before it could take her away, the witnesses said.

THE LAKE WORTH MONSTER 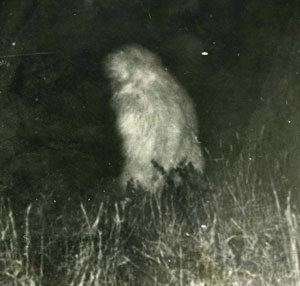 ACCORDING TO LEGEND, the Lake Worth Monster lives on the shores of the West Fork of the Trinity River. It can swim, climb trees and eats fish and chickens. It is seven feet tall and has un-human strength. Some reports say it has horns sprouting from its head, giving the monster the moniker of Goatman.This is the only known photograph of the alleged monster, taken in 1969. (Courtesy photo)

“We’ve had reports about this thing for about two months,” a police dispatcher told the Fort Worth Star-Telegram, “but we’ve always laughed them off as pranks.”

But an 18-inch gash in the car’s side and the terrified nature of the witnesses led police to open a full investigation. It appeared in the newspapers the next day, and the area was immediately caught in monster-fever.

Truckloads of men with guns headed toward Greer Island to hunt the thing. Spectators came out in droves to try to catch a glimpse of it. Reporters swarmed in, and police tried to keep the peace.

Rick Pratt, director of the Greer Island Nature Center at the time, remembers folks coming out with wine, whiskey and beer to have a good time and hunt for the creature.

On the night of July 10, a few dozen people were at a clearing known for dumping near the lake when the monster made another appearance. It appeared on a cliff, looked angry, and threw a tire 500 feet. Everyone, including a group of sheriff’s deputies, ran away in fear.

One witness said the monster gave off a “pitiful cry, like something was hurting him.”Craig Woolheater was 9 that summer. He was fascinated with monsters, dinosaurs and UFOs. He clipped out the newspaper stories about the Lake Worth Monster scare and kept them in a scrapbook.Years later, while driving through Louisiana, he saw something unexplainable. In his headlights, he said, he saw the gray body of a huge primate on two legs. He became a believer and started the Texas Bigfoot Research Center in 1999 to study and educate people about the elusive creature.

Today he lives in Mansfield and is a full-time cryptozoology blogger. He believes the Lake Worth Monster was a real creature, like ones that have been spotted all over the country, stopping in the area because of its viable habitat.

“I personally think it’s an undiscovered, uncataloged primate species that walks on two legs,” he said.

The thing about myths and monsters is they are not easy to prove. But this next story is absolutely true.

It was the summer of 1999, when I was at Fort Worth’s Camp Carter, just down the Trinity River from Lake Worth. Once, we went into the woods in the late evening, trees casting long blue shadows as mosquitos nipped at our ankles and elbows.

We came to a clearing, where the camp counselors had made a small campfire. They told us about the legend of Goatman.

“Listen carefully,” they told us, wide-eyed with fear and amazement, “and you’ll hear his cry on clear nights like tonight.”

The older boys at the camp gave us easy explanations. It was just a way for the counselors to get us to finish our vegetables and not act up. It had to be the counselors making noises in the night.

We walked back to our cabin, sticky with the humid hot air. I knew the Goatman stories had to be just stories.

Yet as I lay down in my bunk that night, listening to the melody of the cicadas outside, I heard something unnatural: a mournful bleating echoing from far across the lake, unmistakable as the monster’s lone cry.

25 Responses to “Lake Worth Monster”