A listener writes “In December of 2017 I saw a being from my back porch. I have told no one but my husband and I only told him because I wanted to protect him, make him aware to be on guard.

And then I didn’t even tell him exactly what I saw, just to be careful because I saw a shadow of a huge animal about 150 feet from our house. My mind was overwhelmed and for a long time I called it a shadow but, in reality it was the creature I was looking at. It doesn’t feel right to call it a Sasquatch or a bigfoot, It looked and felt way to ominous to be just an undiscovered hairy hominid.

It was early December, possibly late November, around 7:30 pm, dark outside except for an exceptionally bright moon, they mentioned the bright moon on the news earlier and that was the only way I would have seen it. My husband was going somewhere and I walked out talking to him as he was leaving, I glanced to the right and saw it and to this day I have no idea what I was saying at the time, I stopped talking and just stared. The next thing I remember is looking up at my husband and he was looking down at me like, well, go on, what is the matter with you? We talk about everything but, all I could do was say, be careful, I love you, have a good time. He looked at me funny and said ok. I watched him get in his truck and leave, to make sure he wasn’t out there and I couldn’t see it anymore, so I went inside and locked the door.

I could only see it from the bottom of his bicep up, a huge bicep, I kept focusing on that. Because the moon was shining on the white siding of a building next door. Here’s the thing that shuts me up, the siding was only on the second story of that building, above a garage door opening where, now abandoned, big trucks were stored. I am trembling now. Dear God, how tall does that make it? The shadow was the darkest black I have ever seen and the whole silhouette was that same color. The only movement was from side to side, like it was gliding on a skateboard. It had a protruding brow ridge and mouth and the nose was completely flat in between, it was a side view. 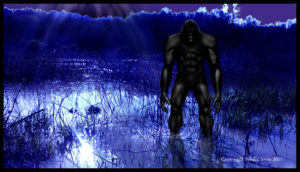 It was a crisp clean line around it, like no fur or hair. The muscles were incredible. I could clearly see them that far away. I ended up on a website, Sybilla Irwin, because no image looked like what I saw as I searched and I can’t stop shaking thinking of it, right on her opening page is a bluish picture of a creature seen in Ohio, Dear God, turn that thing sideways and that is what was 150 feet from my home. I am in Ohio, too. I drew a picture of it, ridiculous of course, I am no Sybilla Irwin, but, to give an idea of what I saw. I can try and send it to you, forgive my lack of tech ability.

I also had a strange encounter, with pictures and video of eye shine, of something tapping on the window at my mom’s house in the middle of the night, but, I am drained from my first story.”

6 Responses to “I Was Looking At This Creature”