Early release for Sunday! Have a great weekend everyone! Jeff writes “Hello Wes, I absolutely love listening to your show. I wanted to share with you one of my two encounters with Bigfoot several years ago. I live in a town called Bluff City, Tn.

The first incident was back in January 2008, and I was 15 years old at the time. I remember it like it was yesterday! It was a cold, crisp night and there was at least 3 inches of snow on the ground. Where I grew up at was on an old road that ran through the middle of a holler and it was rather secluded. We’ve always had many things there on that road happen and it was conmen that none of us would go out after dark. For one the road had only one street light on it so besides the light at my parents house and the single street lamp it was virtually pitch black on the road. We also had plenty of wildlife back in that holler. There were coyotes, bobcats, bears ( and I had came upon several bears walking threw the fields and woods there), deer, the occasional mountain lion. So plenty of animals and all of our neighbors had hunting dogs and cattle and horses. I say all of that for the significance of the story. But going back to the cold snowy night in January.

I stepped outside with my dog to walk it so it could do it’s business and it started there. It was about midnight and my dog would always go out on its own, rain, snow, you name it the dog didn’t care at all. But that night the dog refused to go out. I pushed it out the door for it just to stand there and whine and scratch at the door. This was highly unusual because the dog had never acted like that before. Like it was genuinely scared. So I grabbed the leash and took it out to the front yard. Our yard at the time in front of the house was about a full acre and I had walked the dog to the far end of the yard. Back behind our house was a 19 acre horse farm that belonged to our neighbors. From where I was at you could see a very good amount of the field. So here I am at midnight in all the snow and thank God it’s a full moon night. Having the full moon and all the snow it was lit up like daylight outside so you could see everything! I noticed after standing still for about a minute or so I started to smell a rather odd oder. It’s was one like I had never smelt before. It was musky and pungent and just completely odd where we where at. I mentioned all the wildlife we had in the holler because I had been around all of it. Hunted it all too. And none of those animals ever had a smell like this. That’s when the neighbors dogs who had been barking like a mad fool suddenly went completely quiet and my dog ran behind me and laid on the ground at my feet shaking like a leaf.

I froze and stood as still as I could trying to listen knowing I would hear anything moving with the snow being everywhere. That’s when I heard the walking and shuffling. I turned around and faced my parents house and all was black because I was the only one up at the time always being the night owl that I am. But I faced the house and the 19 acre field behind it and started to look for the source of the sound. Normally I wouldn’t have been so still like I was but this was an odd shuffle that I heard. Because I could distinctively tell that whatever it was, was walking on two legs. There is a difference and I always learned to listen for that in the woods at home so I could tell the difference between game, and a fellow hunter. We all hunted the same land so it was common to run across the occasional hunter. But this was a slow heavy step that I was hearing. Or so I thought it was slow. That’s when I seen it come from behind a line of trees that was in the middle of the field and it was walking through a clearing of about 100 yards or so. It’s was huge. Even though I knew I was about 100 to 120 yards away I could tell that this thing was massive. It the time I was 6’ even and weighed around 280 pounds so I wasn’t very little at my age. But seeing this thing made me feel significantly small. I would say it was anywhere around 7’ or taller. It’s stride was huge. That’s why I said I thought it was a slow heavy step. Even though it was taking fewer steps it was making a quick pace across the field with its long gate. It was taking probably a 6’ step every time.

I could clearly see that it was extremely hairy, you could see the hair swaying on its arms has they swung back and fourth as it walked. And it had a large cones head that was hairy as well. I stood there until it got to the middle of the field and it registered on my mind what I was truly seeing. It was a Sasquatch! I had always believed and had done plenty of research on it. I knew it would be better if I stayed quiet and just watched it go but my curiosity got the better of me. So I let out a small, shrill whistle to see what would happen and the thing stopped in its tracks, turned around and faced directly towards me! I was terrified but yet mesmerized at the same time. I had always heard that these were intelligent creatures so I simply raised my hand in the air almost just as an acknowledgement, and honestly to try and make myself look bigger. But as I did this something amazing happened. The Sasquatch raised its hand in a mimicking fashion and stood there as long as I did with its hand up! When I lowered my hand down again it lowered its hand and then turned back and headed towards the end of the field! The field was surrounded by a 4’ tall barb wire fence and this creature stepped over it like it was nothing.

That’s me moment I lost sight of it was when I grabbed the dog and ran for the house as fast as I could! I woke everyone up to tell them what happened and they have called me crazy every since. But I know without a shadow Of a doubt what I saw that day. Unfortunately for me it snowed again very hard that night and when I went out the next morning and into the field to find the tracks the snow had covered it up except for two wide ruts where it’s feet drug across the top of the snow. But there where no distinguishable tracks to see. I have had another encounter with a Sasquatch as well, and I also had a friend with me witness it the second time. But I won’t go into detail yet on that one since my first encounter was so long and this one is even longer! I have cold chills typing this up to send to you but I know what I saw. And I will never forget what I happened.” 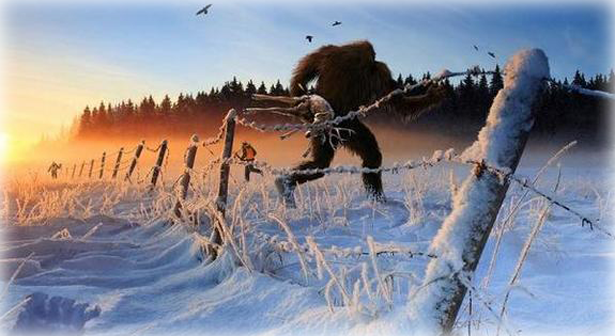 Chris writes “I live in a very rural county in Kentucky. One night, after hours of playing poker, I was leaving a friend’s home at about 2 or 3 in the am.

As I stepped off his porch I heard a noise next to the tree line in front of my jeep. The distance between the porch and the tree line is about 15 yds with his driveway the only thing in between. Looking toward the sound I expected to see a deer or coon or something like that which is nothing strange in the area. What I saw was something crouched down like a baseball catcher. When my eyes landed on it , it stood. Couldn’t see facial details due to the moon backlighting everything from behind the tree line but it was around 7ft tall. It had very broad shoulders, a narrower waist and had arms reaching down to the knees.It felt like it lasted forever, us looking at each other, but probably only lasted 7 – 10 seconds. It then huffed at me then ran off into the trees. I think I surprised it by noticing it and the huff was it saying “dont follow me a$$hole.”