Our first guest writes, “Many years ago I worked on cell towers in remote locations. We were in Pennsylvania and I stepped away from the job site to use the bathroom. There are no bathrooms in these remote locations so we used a 5 gallon bucket and a plastic bag. I heard leaves moving around but could not tell where it was coming from. 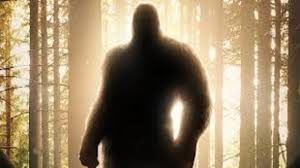 I finished what I was doing and about 40 feet away this thing jumped from the tree, it didn’t fall, it jumped down.It was huge, I mean it was really huge.

This is during the day and this thing jumps from the tree and lands. It turned to look at me. This has upset me most of my life. I am not sure what to say, he looked like the ugliest human ever but much bigger and covered in hair. It turned and looked right at me. This thing snarled, growled and showed its teeth. It than turned and walked away. I was in shock. We had been hearing strange noises prior to that like whoops and knocks but we were so busy working we didn’t pay attention. After that day I never went back.” 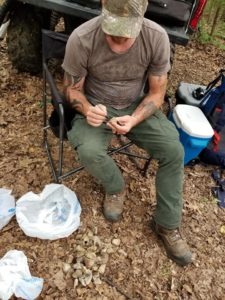 Randy Harrington returns to the show to give us an update on a property he has been investigating with Shane Carpenter along with others. They are putting together evidence on what they have found so far. Randy is known for thinking outside of the box. I have had him on a few shows where he talked about setting up a fake campsite and watching it from a distance. Randy says, “The creatures sit on this ridge line above our camp and throw rocks at us almost every night. So we decided to give them ammunition to throw at us. We investigated the area during the day and found where they were throwing rocks, so we setup rock piles and marked the rocks with a black marker. Each pile we marked the rocks so we could tell exactly where they were and what pile of rocks they were using. The results were interesting to say the least.” 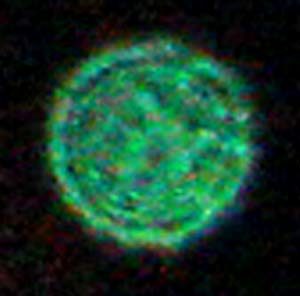 A listener writes “Wes, I’ve been listening to the show for about 4 years and I have to say that I am really impressed with the platform you’ve built and the community you’ve brought together. I’m currently a desert rat living in Las Vegas, NV and I wanted to share my personal story of encountering orbs.

I have never had a Sasquatch encounter but I definitely believe there is something out there especially with some of the accounts that have been passed down through my family.

My encounter took place in Marietta, GA. I was 17 at the time and I had taken a late night flight into Atlanta to see my dad for Christmas. I landed around 9:30pm and it took about an hour to drive to my dad’s house. My dad lives at the end of a cul-de-sac with about 3 miles of forest behind his house. His home is 2 stories with a basement. The main floor overlooks the forest and sits about 30 ft off of the ground with large bay windows overlooking the back deck and the surrounding forest.

Once I settled in my dad went off to bed around 11:30pm. I was set up on the couch in the living room that overlooked the woods. Still on Vegas time(3 hours behind) I was wide awake and was sitting comfortably on the couch reading a book. I looked up from the pages and noticed a faint green glow way off in the trees. I thought at the time it was an insect or a lantern but that thought quickly changed. Over the next 15 minutes the light became more defined and appeared to wobble through the woods. As it got closer I could clearly see 3 distinct orbs all lightly bouncing and wobbling about 10ft off the forest floor. As they got closer I began to feel intense fear and the realization that I could not look away became very distinct. These three orbs floated closer until they got to the backyard gate to which they steadily floated up until they were eye level at the bay windows. They were roughly basketball sized, with a pale green luminescence with a slight haze coming off of them. They were lightly translucent and were frankly very beautiful. I felt mesmerized but gripped with fear. They began bobbing up and down in a random sequence slowly and then more vigorously. At this moment I passed out and have no recollection of anything else that night. I woke up with a significant pain on my left forearm and horrible migraine. I noticed a small metallic object a few centimeters under my skin that was blueish silver in color.

About 4 years later I was back in Vegas doing an evening hike at calico basin. I summited one of the small mountains and was admiring the night sky when I caught a faint green light in the darkened sky. I could see the rising constellation of Orion at the time and I observed this green light stay perfectly still for about 5 minutes. I became gripped with fear again and quickly got off the mountain and went home. I removed the metal object in my forearm and it was incredibly difficult to do so. I ended up making a small incision and using forceps had to pull it out as my flesh had grown around it. There were tissue fibers attached to it and it was incredibly difficult to break those fibers to remove it. I have attached a photo of the scar left behind by removing this object. The object itself was blueish silver but with almost a dark grey patina. It was hard and almost felt like steel or iron but typically the body will push those heavy metals out of the skin if they are embedded.

I am a skeptic and an atheist. I have no belief in most supernatural things as there is little physical evidence to support most claims. I cannot stress how little I actually believe as valid but this experience I cannot rationalize my experience and science tells us it is not only likely but it is statistically impossible for life to not exist outside of our planet. I am not sure if this was extraterrestrial in origin or perhaps a more rational terrestrial event but either way I am only left with questions and a mind grasping to connect the dots.

Thank you for reading and for everything you do Wes!”